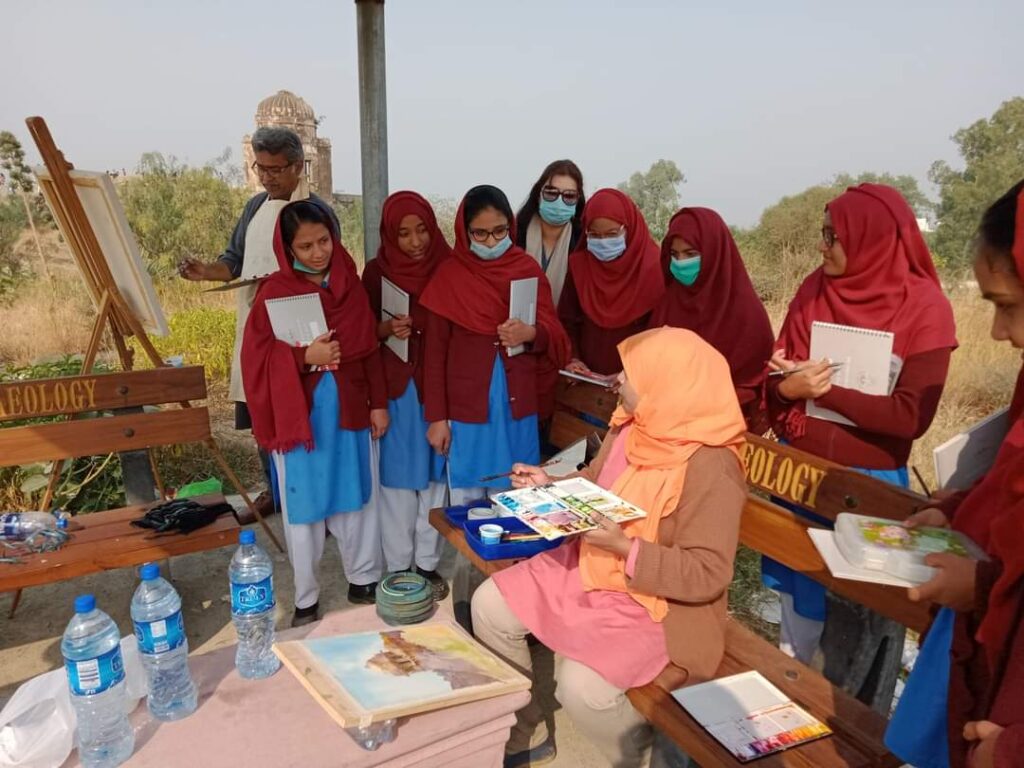 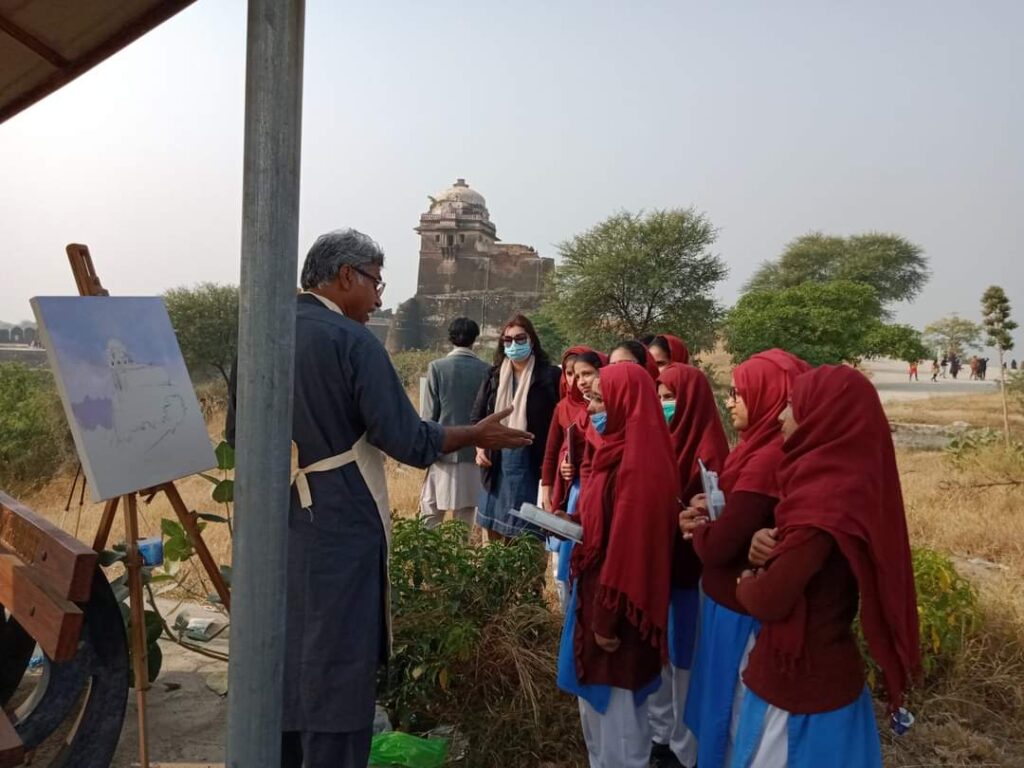 Students of government high School Rohtas visited plein air artists working on spot inside the Fort. These students are members of “Rohtas Heritage Club” established by STFP under the UNESCO funded project.  Ms. Huma Wasiq and Taha Wasiq are facilitating this Club since almost an year as resource persons.

Sustainable Tourism Foundation Pakistan  with the support of UNESCO, Italian Development Agency and Punjab Archaeology Department has been able to hold different workshops and deliver various ways of promoting their own Heritage in front of the world and tourists visiting Rohtas. This time it was an excellent opportunity for these youngsters to learn from the masters of Plein air in Pakistan who visited to support our aim to support and engage local community  in conservation efforts at Rohtas Fort. 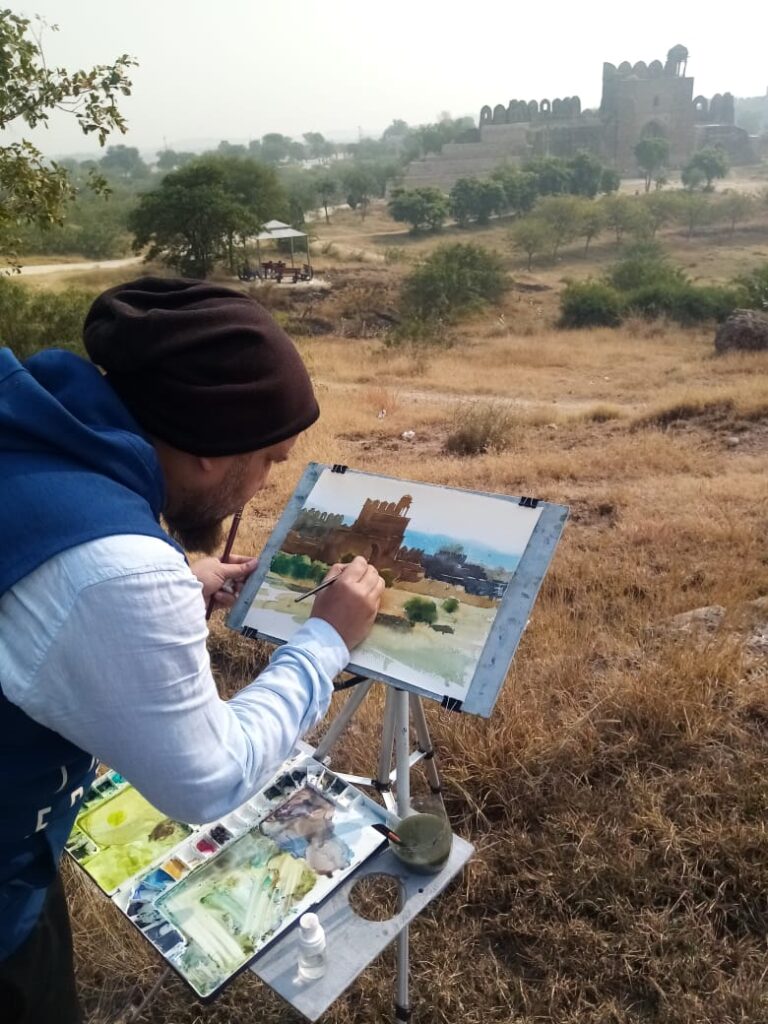 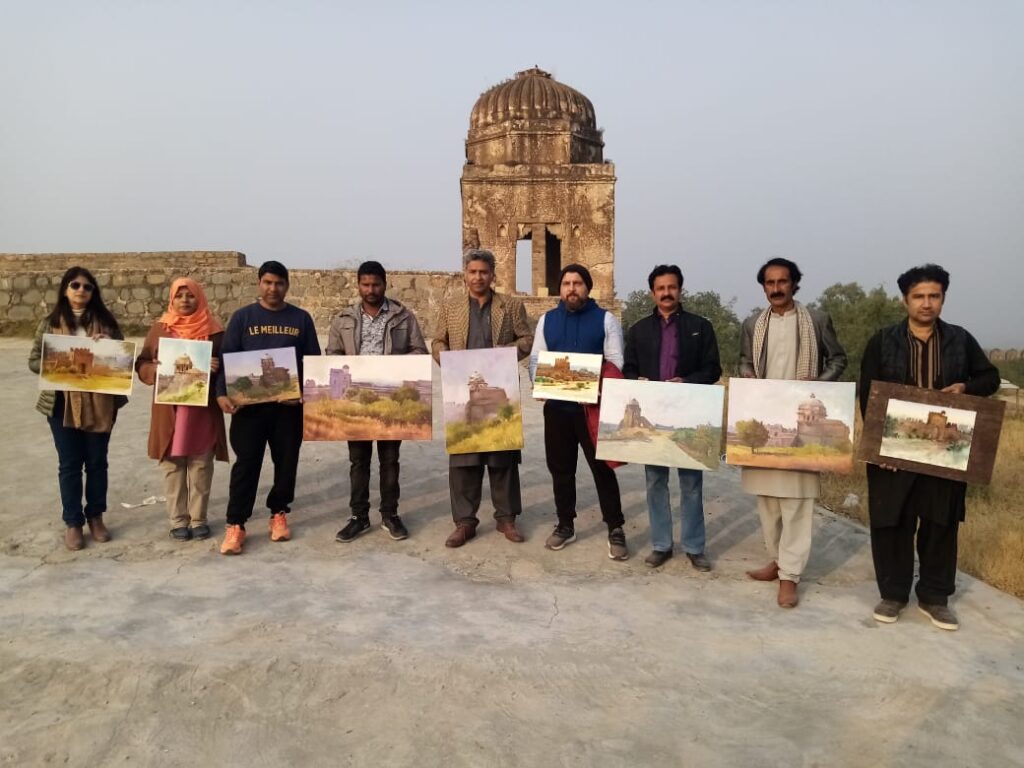 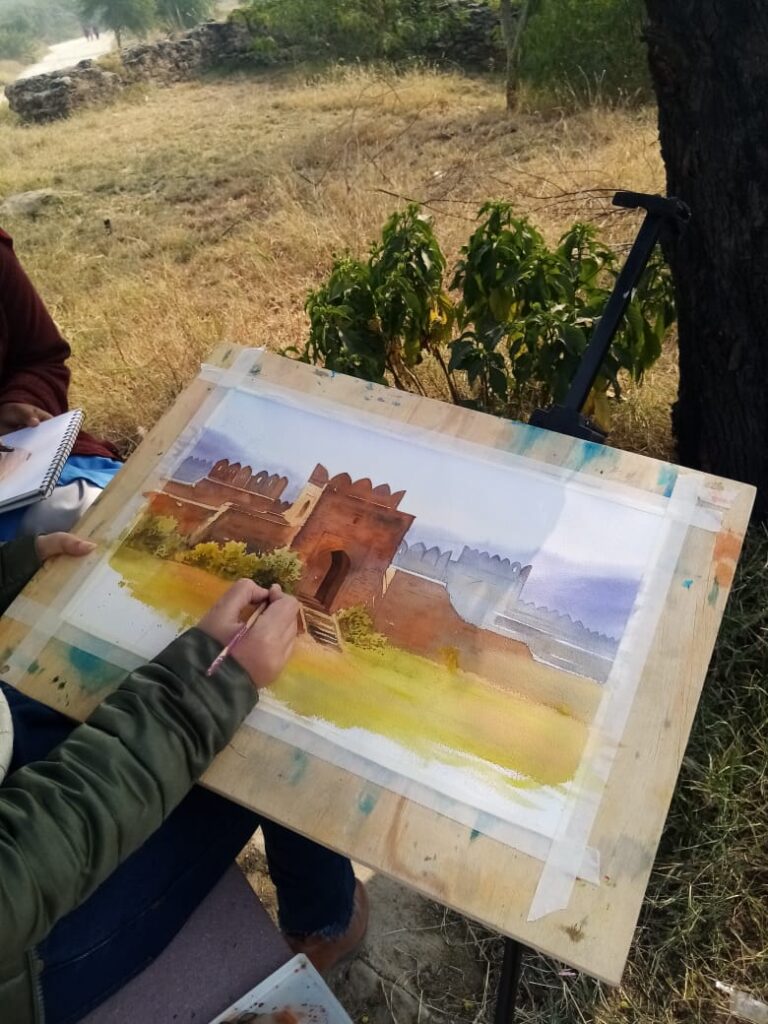 Sustainable Tourism Foundation Pakistan organized a Plenaire Painting trip to Rohtas Fort from 26 to 28 November. Rohtas Fort is a world heritage site located at distance of around 115 km from Islamabad, the capital city of Pakistan. 10 artists from different cities of Pakistan participated in this event and each one is producing at least two to three paintings for exhibition and sale for fund raising to support the local community women heritage crafts enterprise at Rohtas Fort which STFP has established to engage local women in heritage conservation and responsible heritage tourism. These artists also engaged local school girls in painting activity during their stay at Rohtas for three days. STFP is working with local community of Rohtas Fort to promote responsible community based heritage tourism with the support of UNESCO Pakistan. 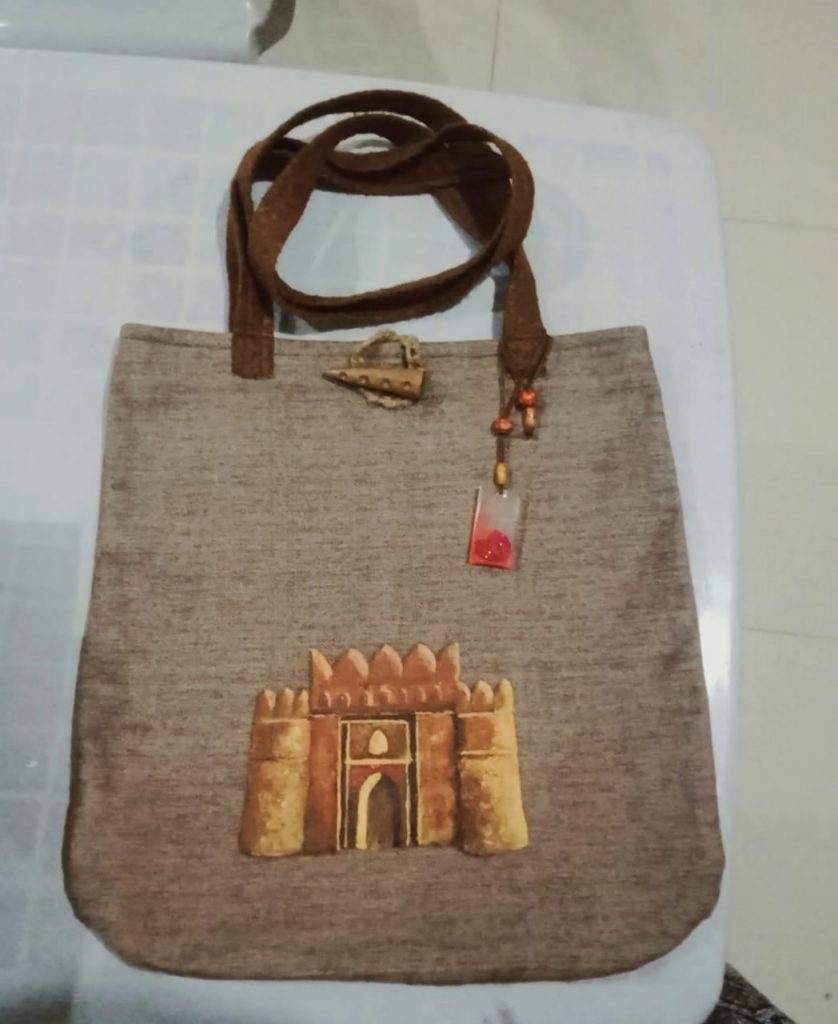 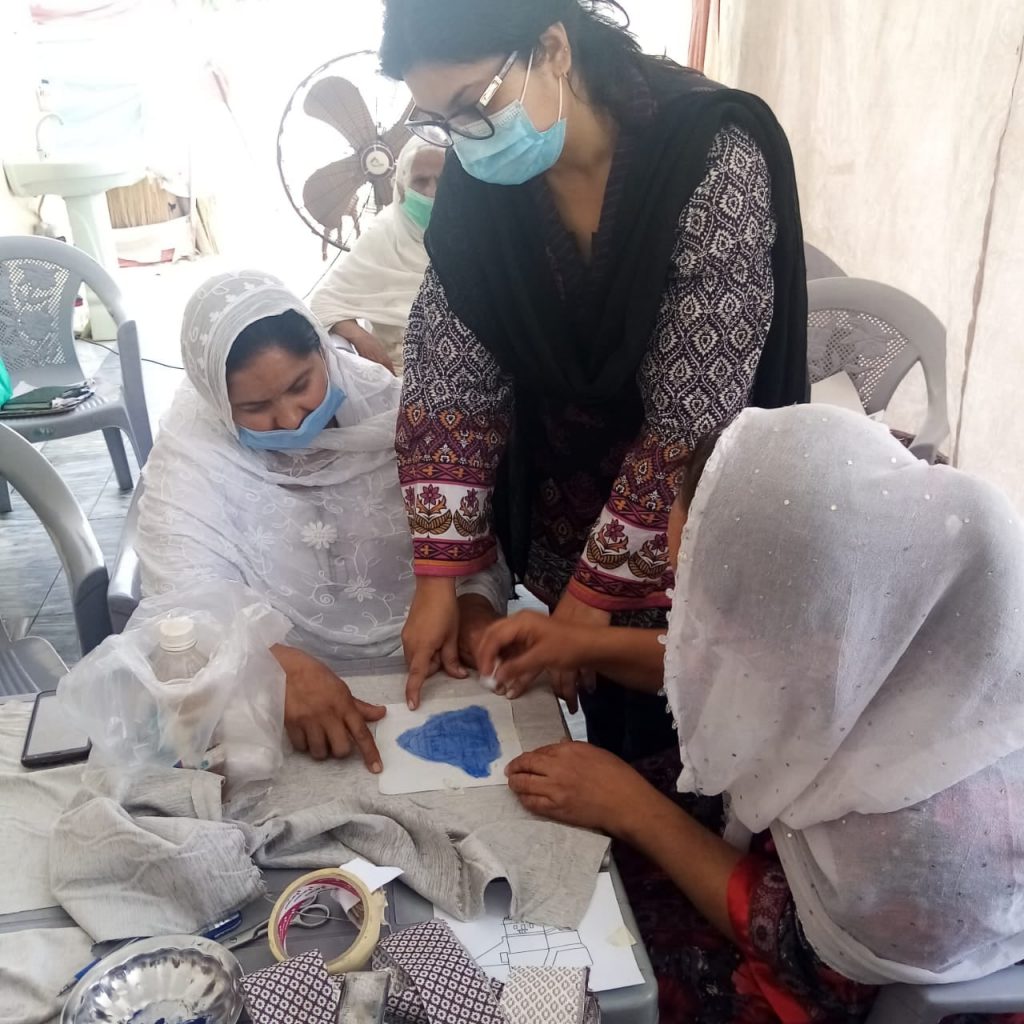 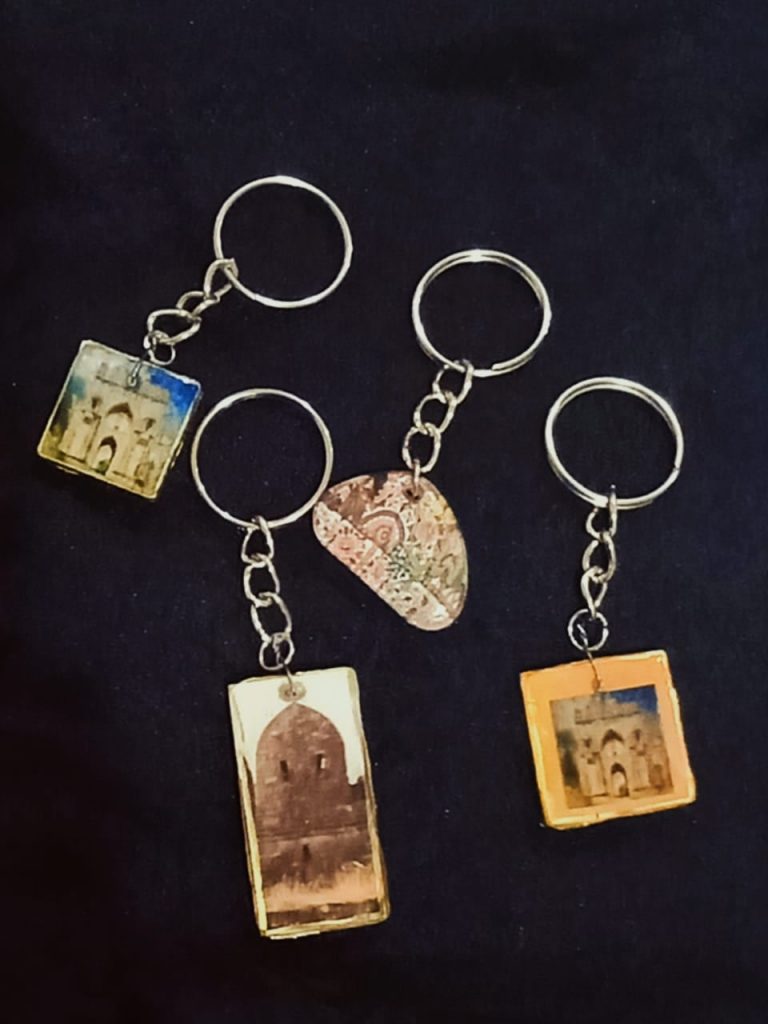 Under the initiative of “Engaging Local Community and Youth in Safeguarding Heritage and Promote Heritage Entrepreneurship through Capacity building and Awareness Raising at Rohtas Fort”, STFP successfully organized a five days training workshop for the local community women at Rohtas Fort to establish a handicrafts enterprise.
This training workshop was jointly organized by STFP and UNSECO Pakistan with the support of District Government of Jhelum and Archaeology Department under the supervision of Mrs. Huma Wasiq. The main aim of this workshop was to build the capacity of local women from the village of Rohtas to produce some good quality handicrafts for sale to the visitors of this World Heritage Site and effectively engage them to be part of heritage conservation efforts as well as earning decent livelihoods from the sale of these unique handmade products. On this occasion a replica coin making workshop for the local school girls was also conducted jointly by Huma and her son Taha. This group of local women now works as community based enterprise with the name of Rohtas Heritage Crafts. STFP is highly thankful to Mrs. Huma Wasiq for contributing her time and energy to polish the skills of these local women. 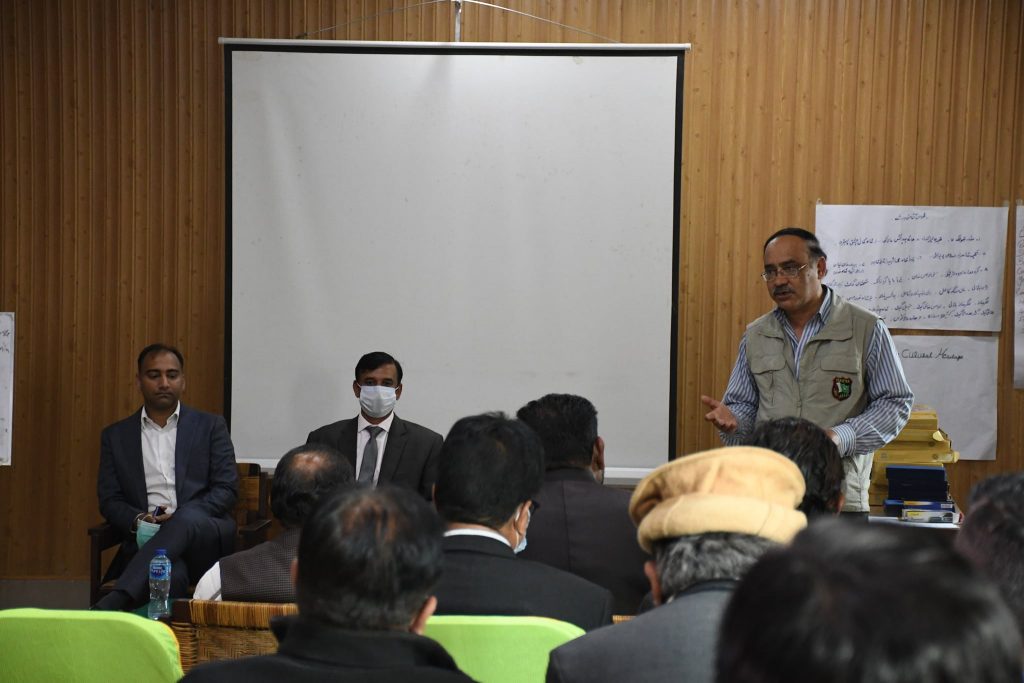 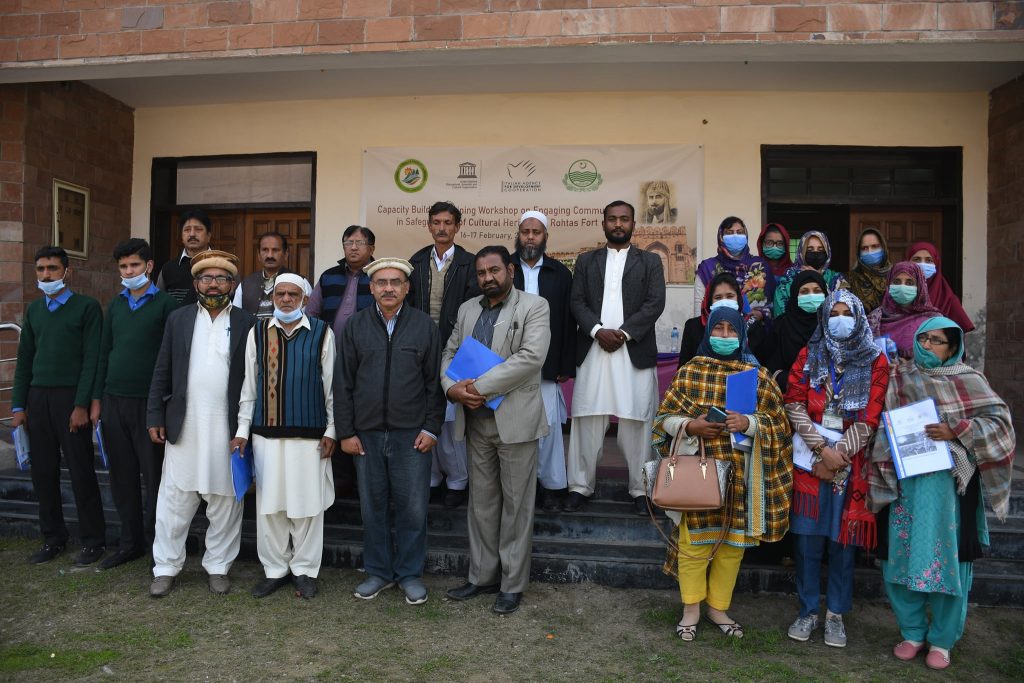 Around the world there is now an increased recognition of the needs for the involvement of local community in the conservation and preservation of their cultural and natural heritage. In Pakistan, there is now growing awareness that the future of Pakistan’s remaining heritage will largely depend on the decisions and actions of the present generation of young people who will soon become the leaders and decision-makers of tomorrow.
Recognizing these facts, UNESCO Pakistan and Sustainable Tourism Foundation Pakistan with the active support of District Government Jhelum and Punjab Archaeology Department organized a two days training workshop focusing on engaging the community and school going youth in safeguarding cultural heritage in the area of Rohtas Fort.
This training workshop was held of 16 and 17 February at Rohtas Fort and 26 male and female teachers and four senior students from 8 schools from the area of Rohtas Fort participated in this training Program. Mr. Aftab Rana, Mr. Attique ur Rehman, Mr.Muhammad Bin Naveed, Mrs. Alima Bibi and Mrs. Huma Waqis conducted various sessions as resource persons.
Lectures, presentation, group work, field survey were conducted by the resource person on the topic of heritage conservation, community engagement in heritage protection and heritage entrepreneurship and developing a sense of responsibility among the local community to play active role in the protection and conservation of cultural heritage. As a follow up of this training now the trained teachers will organize awareness raising sessions in their schools to educate their students about heritage conservation. This will specially help them to understand the value of Rohtas Fort and other cultural heritage, and enable them to develop positive social behaviors to actively contribute to the protection of cultural and natural heritage of their community.
The closing ceremony of this event was held of the evening of 17th February at Rohtas Fort and Mr. Rao Pervaiz Akhtar, Deputy Commissioner of Jhelum attended as Chief Guest. He distributed certificates among the participants. Mr. Roa highly appreciated the efforts of UNESCO and Sustainable Tourism Foundation to hold this educational program for the teachers of local schools.
On this occasion President of STFP, Mr. Aftab Rana, Miss. Mariam, Representative of UNESCO and Mr. Imran, SDO of Department of Archaeology also spoke about the importance of heritage conservation and the role of communities. 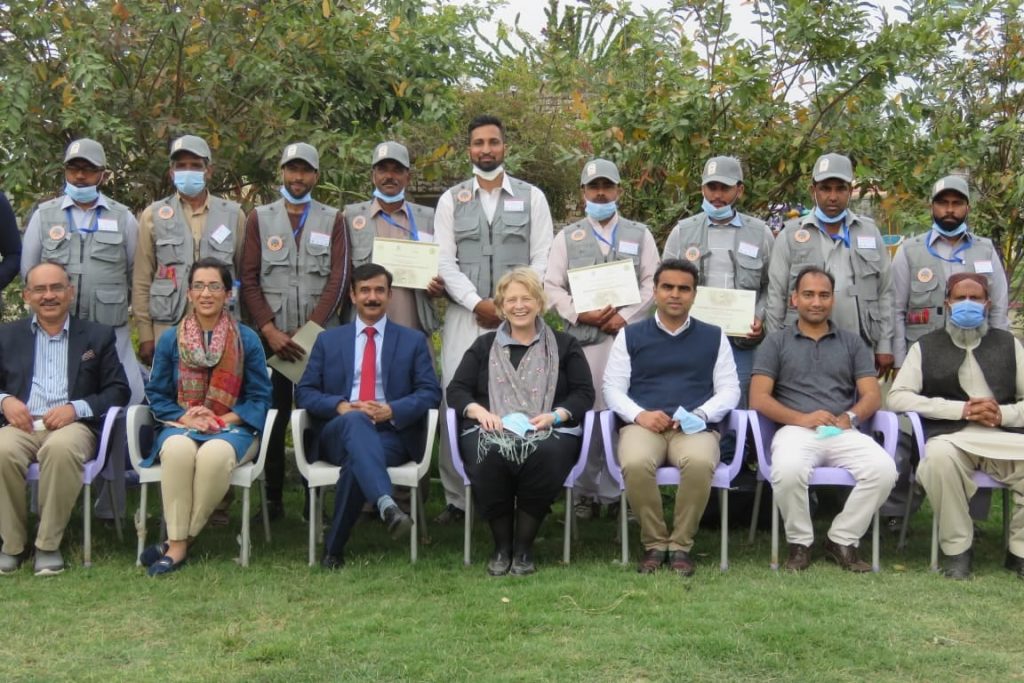 STFP organized a Training Workshop for the Local Community Tourist Guides at Rohtas Fort
Under the title of “Engage Local Community and Youth in Safeguarding Heritage and Promote Heritage Entrepreneurship through Capacity building and Awareness Raising at Rohtas Fort” A one week training workshop was jointly organized by STFP and UNSECO Pakistan from 2nd to 8th March 2021. This training program was also supported by Punjab Department of Archaeology and District Administration of Jhelum. 18 male and 2 female members from local community participated in this training Program. Mr. Aftab Rana, Mr. Arif Tufail and Mr. Muhammad Bin Naveed conducted various sessions of this training as resource persons. Prof Z. B. Mirza, also participated as guest speaker and delivered a talk on the wildlife of the Salt Range area.
The main goal of this training was to build the capacity of local community tourist guides to gain professional knowledge and skills and adopt a positive attitude to play active role in safeguarding World Heritage Site of Rohtas Fort. This training course was comprised on procedural knowledge and technical skills which a cultural tourist guide should have to professionally conduct a group of tourists at the heritage site of Rohtas Fort. Knowledge about tourism sector, Pakistan as a tourist destination, cultural and heritage diversity of Potohar region, environment and cultural ethics and responsible tourism practices were part of knowledge component of this course. Tour group management, sharing information with tourists in an interesting way, leading group of tourists in a safe and comfortable manner, communication skills, basic first aid, making arrangements for transport, lodging and boarding, establishing good security of visitors, understating of tourism related laws and dealing with general emergencies were the major component of the skills development part of this training. Moreover, effort was made to motive the trainee guides to adopt a positive attitude towards safeguarding cultural heritage themselves and also to inculcate the same spirit among the visitors.
The closing ceremony of this event was held on the afternoon of 8th March at Rohtas Resort. Mr. Rao Pervaiz Akhtar, Deputy Commissioner of Jhelum attended as Chief Guest and Ms. Partrica Mc Phillips, Director of UNESCO Pakistan attended as Guest of Honor. On this occasion, newly trained tourists guides also gave a demonstration trip of Rohtas Fort to Ms. Patricia which she highly appreciated. In her closing comments, she said that Pakistan’s diverse cultural heritage is at risk due to vandalism, neglect and lack of understanding of the high potential for cultural and economic development opportunities. She said, we support local communities taking ownership of their heritage. In this project we brought together students, teachers, government officials and most importantly local communities to find solutions to protect Rohtas fort to increase the economic prosperity of the community through responsible tourism and to incorporate the importance of the collective heritage ownership. She thanked the team of STFP for making this great contribution to significantly bring a positive change among the local community members. She also appreciated the local community members for taking interest in this initiative and she hoped that this will open gates for them towards better local economic growth.
Mr. Rao Pervaiz Akhtar, Deputy Commissioner of Jhelum appreciated the efforts of STFP. He said, the torchbearer, Mr. Rana Aftab and his team did a wonderful job by building capacity of the local people of Rohtas. He said, UNESCO Pakistan also deserves appreciation for launching this program for the betterment of the local people. He said, the district of Jhelum is a hub of cultural heritage and Rohtas as a World Heritage site is the most significant historical monument of this region. He said, Rohtas is also special as a local community live inside this fort and it is their duty and responsibility that they should play active role in the preservation of this World Heritage site